Warning: Use of undefined constant REQUEST_URI - assumed 'REQUEST_URI' (this will throw an Error in a future version of PHP) in /home/fearandl/public_html/sites/urbanistdispatch.com/wp-content/themes/valenti-child/functions.php on line 73
 Lessons in Public Private Partnerships – The Urbanist Dispatch
Home
Economic Development

In 2003, the buildings formerly known as the mercantile buildings in downtown Hamilton, Ohio were two weeks from their demolition date. After years of neglect, the floors of the two buildings, built in 1897, had collapsed, causing the buildings to be condemned. City leaders were anxious to save these prominent and historic buildings, recognizing the value of downtown Hamilton’s character that sets the southwest Ohio city apart from the suburban sprawl that surrounds it.

The City of Hamilton intervened to stop the demolition, acquiring the buildings and setting to work finding a development partner.  For four years, the redevelopment efforts to transform the former department store buildings into a mixed-use development started and stopped, as partnerships were made and fell apart. Finally in 2007, the City met developers from Coon Restoration, a historic developer based in Canton, Ohio who agreed to take on the project.

Fast forward to 2013. The public-private partnership between the City of Hamilton, Ohio and Coon Restoration has yielded three large-scale projects in downtown Hamilton. The first project was the $8.6 million renovation of the of the Historic Mercantile Lofts into 29 fully occupied market rate apartments and 4 street level retail spaces. The second project was the $2.5 million renovation of the former Journal-News building, the former office and print shop of Hamilton’s newspaper,  into a cultural hub for Butler Tech School of the Arts, Miami Valley Ballet Theatre, and Hamilton City Schools Adult Basic and Literary Education (ABLE) program. The third project was the $1 million renovation of the Robinson-Schwenn building, the 147 year old former home of Hamilton’s orchestra, which includes 3 floors of office space and 3 first floor retail spaces which are now home to Liferay’s national sales office, the Lane Library’s new Community Technology Center, and Miami University’s Downtown Hamilton location.

These three projects ultimately led to $12 million invested in Hamilton’s Downtown – $3.5 million from public sources and $8.5 million from private sources. For a city of 62,000 people facing severe economic woes due to the decline in its manufacturing base, this investment was transformative. Consequently, the International Economic Development Council recognized this partnership as the 2013 Gold Excellence in Economic Development Winner in the Public-Private Partnership category for medium-sized cities.

Against many odds, Hamilton, a 200+ year old Rust Belt city, has begun a renaissance in its downtown in large part due to this effective public-private partnership. Its lessons might be useful for other cities struggling with similar issues. As a young urban planner who lives and works in Hamilton, these are take-aways I have found useful from this partnership:

1.       Persistence. Like the other partnerships involved in the Mercantile Lofts, the one between the City of Hamilton and Coon Restoration almost fell apart. The circumstances surrounding the development had not changed and it was still a risky investment. The expense of renovating the properties was very high and the product was untested – it had been decades since Hamilton had a market rate apartment development available in its downtown. There were times when it looked like Coon Restoration might walk away from the project, but sheer determination, vision, and inventiveness from both partner organizations kept the project moving forward. For example, financing the $8.6 million project, especially during the recession, proved difficult. However, Coon Restoration and the City of Hamilton sought a wide variety of funding mechanisms to keep the project moving forward, including state and federal historic tax credits, a TIF district, a loan from the city, and two short-term construction loans from the Hamilton Community Foundation that served as the bridge to permanent financing.

2.       Leadership. The initial City leadership deserves much credit for saving the buildings and initiating redevelopment efforts. A change in leadership within the City of Hamilton likely played a large role in making the partnership with Coon Restoration succeed when others had not. The City of Hamilton hired its first ICMA credentialed City Manager, Joshua Smith, in 2010. When it looked like Coon Restoration might not be able to move the Mercantile Lofts project forward, Smith offered inventive solutions that ensured the developers stayed (see lesson #3).  This type of leadership has continued to be instrumental as the partnership evolved and took on new projects.

3.       Creativity.  In 2011, the developers from Coon Restoration thought they could not complete Phase Two of the Mercantile Lofts project. Phase One included only one retail space and nine loft apartments, while Phase Two included three more retail spaces and twenty more apartments. For it to be the catalytic project it was envisioned to be, Phase Two was essential. City Manager Smith came up with a unique proposal – the City would sign a five year lease on three Phase One apartments and use them for a new fellowship program for the City of Hamilton. The fellows, recent graduates of master’s programs from around the country who were coming to Hamilton for a year-long fellowship in local government, would need housing anyway, so Smith proposed that lease at the Mercantile Lofts would be part of their salary. The developers from Coon Restoration thought it was a great idea and the lease was signed. With a promise of a third of the existing apartments leased for five years, Coon Restoration felt comfortable moving forward with Phase Two, doubling down and investing even more money to see the project through. The fellowship program and the apartment deal were both big successes. The City attracted new energy into its operations and the fellows served as ambassadors for the Mercantile Lofts projects, quickly becoming unofficial tour guides of the lofts. Within eight months of Phase Two being opened in 2012, 95% of the lofts were filled.

4.       Common sense. Creativity is important, but common sense can sometimes prove even more difficult. Often, city governments fall into the “it’s the way it’s always been done” trap or they get so muddled in bureaucracy that they do not make very good development partners. However, the City of Hamilton tried to make sure it did what it could to be a good partner. For example, the City owns a municipal parking garage adjacent to the development. The City not only allows the developers to utilize for residents and retail employees, but it also allowed Coon Restoration to install an entrance on the second floor of the garage and connecting it to the Mercantile buildings, thus allowing residents an easy and safe entrance into the building from their cars. Given that there was ample space in the garage for resident parking, it may seem like a “no brainer,” but something like this had not been done before in Hamilton, making the process to achieve it somewhat challenging. However, City staff did what it needed to do to make it happen, breaking away from stereotypical (but sometimes accurate) government culture of “no” and finding ways to say “yes”.

5.       Vision.  Coon Restoration’s vision for downtown Hamilton has been truly remarkable. As outsiders with no attachment to Hamilton, the developers came in and took risk after risk on Hamilton’s downtown.  After years of outward migration and decline, very few Hamiltonians themselves believed the Mercantile Lofts would be a success, but Coon Restoration saw opportunity where others saw roadblocks. After the first project was completed the developers walked through a vacant old newspaper factory, the Journal-News building, a block away from the Mercantile Lofts. They envisioned an arts hub here for downtown Hamilton. Then they acquired the 147 year old downtown orchestra hall and transformed it into four stories of high-end office space. Each of these projects had its own challenges, but each project the partners took on was easier and less risky than the last. In fact, both the Journal-News renovation and the Robinson-Schwenn renovations took roughly a year, far less time than the decade it took to get the Mercantile Lofts completed, in part due to the lessons learned from the initial project and relationship the partners had developed.

These three projects have been very successful, proving to be beneficial for both the City of Hamilton and Coon Restoration. I look forward to seeing what projects the partners might take on next.  In the meantime, I try to embody these lessons in my own job with the City of Hamilton, making sure I am a valuable participant in the revitalization efforts taking place in the city. 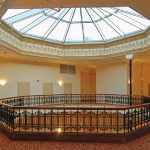 The atrium in the Mercantile Lofts building

Apartment in the Mercantile Lofts 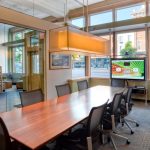 Liferay’s office in the Robinson-Schwenn building 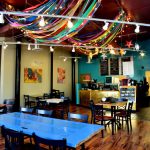 Dance class in the JournalNews building 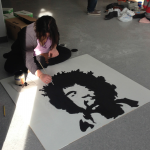 Butler Tech School of the Arts student in the JournalNews building 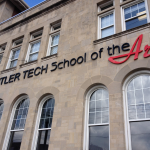